I’m so excited to bring you my cute book full of queer people having fun and being silly!!

If you preordered the ebook, unfortunately you’ll have to order it again do to an amazon error. But everything is good to go now for both ebook and paperback versions on Amazon or GreatAce.Club!

Haven’t heard about Press Start? Now is a great time for this fun, low stress read about a group of friends bonding over video games.

Blurb: A new app has turned the whole world into an augmented playground. By reinventing retro party games, HoloHeroes makes sure it has something for every player. However, Loren worries she’s been missing out. The death of her father and a move across the country makes it feel as though she has to start life over. As a sweet sixteen gift, Loren’s given Ghost Glasses, allowing her to be her own HoloHero. Local meetups serve as a jumping-off point to make new friends, find herself, and win cash prizes. But what started as casual fun turns into an accidental rivalry with a veteran champion of the game and a race towards the national stage.

So are you ready to —

For the first time ever you can get Bone Diggers for 99 cents on Amazon!
But hurry the offer for this bi video game adventure is only for today!

It’s a busy time for everyone with holiday shopping and/or NaNoWriMo so I won’t keep you any longer thanks for your time today and hopefully, you read! ❤ Rose

Budget Ace Ebooks. Do they exist? Totally!
Are they good? Absolutely! Here’s our list for ace books under fiver dollars!

Books can be expensive. There’s so many aces there days and if you might be wondering where to start. We got you covered in a way that doesn’t make your wallet cry.  If your budget is really tight check out our Kindle Unlimited list.  Or scroll to the bottom of this list. While Unlimited is a paid service you can normally get a month for free. But if you read slowly like me buying is often the best option 🙂 All prices should be their standard price so this list should be accurate no matter the date. For more details about these books, here’s our master list.

Romance:
Blank Spaces
The Life and Death of Elie and Jay
How Now To Summon Your True Love
Heels Over Head
A Date With An Angel
Overexposed
Thaw
The Pardoner’s Tale
Learning Curves
Eligible
Carrie Pilby
We Awaken
Interface

Free!:
The Alpha and His Ace
The Foxhole Court
Enemies Like These
The Beast of Callaire

If you need some reviews before buying, we’ve reviewed a number of these books! 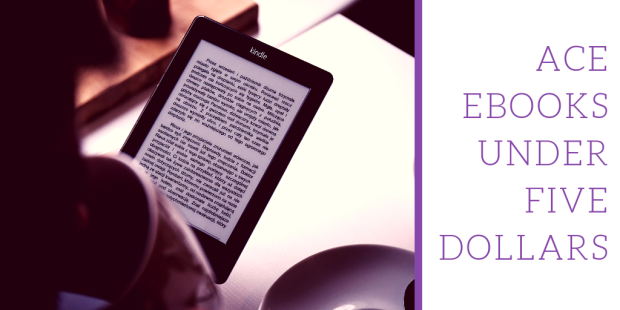 Books can be expensive, so here’s a list of ebooks under five dollars. And if that still isn’t your pace check out our Kindle Unlimited list.  Or scroll to the bottom of this list. While Unlimited is a paid service you can normally get a month for free. But if you read slowly like me buying is often the best option 🙂 All prices should be their standard price so this list should be accurate no matter the date. For more details about these books, here’s our master list.

Romance:
Blank Spaces
The Life and Death of Elie and Jay
How Now To Summon Your True Love
Heels Over Head
A Date With An Angel
Overexposed
Thaw
The Pardoner’s Tale
Learning Curves
Eligible
Carrie Pilby
We Awaken
Interface

Free!:
The Alpha and His Ace
The Foxhole Court
Enemies Like These
The Beast of Callaire

I’m excited, and I hope you are too! (I also hope you pre-order the ebook or pick up a copy of the paperback when it’s out!) 😉

If you want to know more here’s the blurb:

Dirty little secrets can’t be hidden behind player avatars, because Bone Diggers like Owen expose the lives behind the code. When his two worlds blur, he must decide which is more important: his freedom, or the game. The right choices will be rewarded with fame, fortune, and adventure. A wrong call can cost him both lives. But playing the game is what Owen does, and he’s good at it…as long as his real-life adventures don’t prove more perilous than his digital swordfights. In the real world, there is no walkthrough.

If you missed the shoes, it’s full of queer characters and talks about fandoms, video games, and the cultures of both.

Kindle Unlimited Aces can be tricky to find since there’s seemingly an unlimited supply of books to choose from. In this blog post I’ll break down the book, age range, and character so you can start loading your kindle up with hopefully your new favorite book.

If these Kindle Unlimited Aces aren’t enough for you, or you need more details about these books check out the FuckYeahAsexual master list or our reviews!

I don’t read as much as I’d like for a lot of reasons. But, I have found something to help with this. Now when I’m not feeling it, I have the book read to me. It doesn’t matter if the book isn’t published yet, or if an audio version doesn’t exist. And the best part of all, it’s completely free!

Now this guide will cover ios and kindle since they are the most used platforms, but similar features and phones can be used.

Beginning Steps: Go to settings, then down to Accessibility, then Speech.

By toggling “Speak Screen” on you can swipe down with two fingers and your phone will read to you whatever is on the screen. Other settings in here will allow you to have it read highlighted areas,control reading speed, and what voice and language it reads to you in. I personally prefer ‘Siri (Enhanced)’.

Next, open your book of choice and swipe down!

If it works this is what it will look like:

Don’t worry the box will minimize, go transparent, and it’s completely movable if you want to read whatever is under it. This menu also gives you some control over reading speed, play/pause, and fast forward/rewind if you’ve missed something.

If you keep this app open it will even flip kindle pages for you!

Is this better than audible? Nope. But sometimes it’s the only option and it’s one that works pretty well.

Now here are some tips because sometimes it doesn’t work 100%.

“No speakable content”: I’ve noticed if you have it stop, then swap apps you can’t have it read again without closing the kindle app and restarting it. It might complain and say this:

I’ve played with it a few times and now I can make it play or error on demand so if it messed up on you don’t worry. Close the app and just open it again.

It’s not reading the right thing: Siri tries really hard to read what you tell it. If the menu is on top of anything it will read that instead. Close the menu by touching the text and you’ll be good to go again.

Sleep timer: I heard if you use ibooks you can have a sleep timer using the built in “Timer” feature under “Clock”. Instead of having a noise “When Timer Ends” scroll all the way down to “Stop Playing”. You can use this selectively with other apps or just music in general. It likes built in apps more than third party.

If you want a Kindle sleep timer you have to use the “Guided Access” under Settings > General > Accessibility > Guided Access. If you aren’t careful here you might lock yourself out of your phone, and feel really silly when you have to force restart it. I’ve done it at 1 am before. So it happens to you don’t worry. I don’t use this part of it anymore, but it’s epic to know I can turn any book into an audiobook, and have it read to me without needing a fairy godmother to prevent it from reading until dawn. Makes me feel like a kid who has magical tech powers.

Read anything!: Turn this feature on and you can have anything on your screen read to you. It’s great. I have it read long online articles to me, I have it read things I’m writing back so I can catch typos. This feature is next to life changing.

I also hope you enjoyed the HELLO WORLD sneak peeks 😉